Rommi Smith is a multi-award-winning poet, playwright, theatre-maker, performer, librettist and scholar. Winner of numerous prestigious residencies and commissions from institutions ranging from the British Council to the BBC, she is a three-time BBC writer-in-residence. Rommi’s writing is broadcast on programmes and stations, including: POETRY PLEASE, THE VERB, IN TUNE, WOMAN’S HOUR, LATE JUNCTION, BBC WORLD SERVICE and Melvyn Bragg’s acclaimed BBC series THE MATTER OF THE NORTH.

Rommi is the inaugural British Parliamentary Writer in Residence and inaugural Poet-in-Residence for Keats’ House, Hampstead. Her writing is published by BLOODAXE, NEW YORK UNIVERSITY PRESS, SEREN, SHOESTRING PRESS, ROUTE, OBERON MODERN PLAYS and PEEPAL TREE PRESS, among others. In 2018, she founded her own production company and small press: 125TH& MIDNIGHT.

Rommi holds a doctorate in English. Her scholarship is a re-reading of the legacies of the classic Black blues and Jazz women. As a Visiting Scholar at City University New York (CUNY), she presented her work at institutions including: THE SEGAL THEATRE, THE SCHOMBURG CENTER FOR RESEARCH IN BLACK CULTURE and CITY COLLEGE NEW YORK. Rommi’s performance at THE SCHWERNER WRITERS’ SERIES in New York was at the invitation of Tyehimba Jess, Pulitzer Prize winner for Poetry. Her scholarship was first published by NEW YORK UNIVERSITY PRESS as part of the groundbreaking book IMAGINING QUEER METHODS (2019).

THE RAIN IS COMING is a feminist reworking of Schubert’s Die Schone Mullerin a collaboration with British composer Emily Levy and celebrated British baritone and composer, Roderick Williams. The piece received its world premiere on BBC RADIO 3. Rommi is currently collaborating with Roderick Williams on a new work, in response to Beethoven’s archive which is scheduled to premiere this year at the AUSTRALIAN FESTIVAL OF CHAMBER MUSIC.

Shortlisted for a SOUTHBANK SHOW AWARD, Rommi’s plays have been performed at the EDINBURGH FESTIVAL and broadcast on BBC radio in the AFTERNOON DRAMA and WOMAN’S HOUR DRAMA slots. She has received theatre commissions from companies from PAINES Plough to PENTABUS. A recipient of a Hedgebrook Fellowship (USA), she is winner of THE NORTHERN WRITERS’ PRIZE for Poetry (chosen by the poet Don Paterson) and the Elizabeth George Award. Further honours include: a CAVE CANEM fellowship and scholarships from Hugo House and The Shipman Agency.

Rommi’s first digital play ALL THE PLACES WE COULD TRAVEL, which she both wrote and co-directed (her first directing credit) is commissioned by DERBY THEATRE and was written and produced during the global pandemic. Rommi is thrilled to be named one of the SPHINX30 playwrights; a prestigious programme of professional mentoring which has identified 30 leading British women playwrights and is curated by legendary company SPHINX THEATRE. Project mentors include: Pulitzer-winning playwright Lynn Nottage, Winsome Pinnock and Timberlake Wertenbaker.

A sought-after facilitator, lecturer, mentor and qualified teacher - with over twenty-five years’ experience of working in diverse community, educational, academic and mental health settings - Rommi curates bespoke writing and performance-based experiences for individuals, groups, institutions, and authorities. Her client-list ranges from: The NATIONAL THEATRE INSTITUTE, USA (for whom she is visiting faculty) to the NHS (for whom she was a writer-in-residence and where she still continues to work as a creative specialist in the field of perinatal mental health).

In 2021, Rommi is honoured to be the inaugural Writer-in-Residence for TOPFOTO (the UK’s leading photographic archive). She is a forthcoming Poet-in-Residence for the WORDSWORTH TRUST, GRASMERE.

"There is a place where the musical, the political, the spiritual and the beautiful come together and it is here."

"Spirit. Takin’ it to the edge. Sunrise. Sunset. Rommi Smith got thunderstorm in her hands. Painting pictures with her voice…waking the landscape ."

"Thank you for helping me colour in my outline.”

Rommi Smith is a qualified teacher and sought-after workshop leader, with over twenty-five years of experience teaching creative writing and performance from nursery to university level. Creator of bespoke creative writing experiences, Rommi tailors creative writing workshops and events for a wealth of festivals, groups, organisations and institutions, from The National Theater Institute to The NHS. More info

Rommi has been awarded numerous prestigious international residencies from organisations ranging from the British Council to the BBC; The Florence Nightingale Museum to The Houses of Parliament. Rommi is both the inaugural Parliamentary Writer in Residence and Inaugural Poet in Residence for Keats’ House. Rommi was awarded a prestigious Hedgebrook Fellowship in the US and is a grateful recipient of the Elizabeth George Award. Rommi is currently working on commissions for BBC Radio 3, The London Metropolitan Archive and The Poetry Library at the Southbank Centre, inspired by works from The Arts Council Collection. More info

Proud to be part of Invisible Man: A Parable for Our Times? BBC Radio 4 this Thursday 14th of April at 11.30 a.m.… https://t.co/LoKSSmdYGU
h J R
@rommismith

RT @TheNapMinistry: Black women have been trained via capitalism and white supremacy to be a mule for the world. Even offering advice, labo…
h J R
@rommismith

Who Rommi Works With 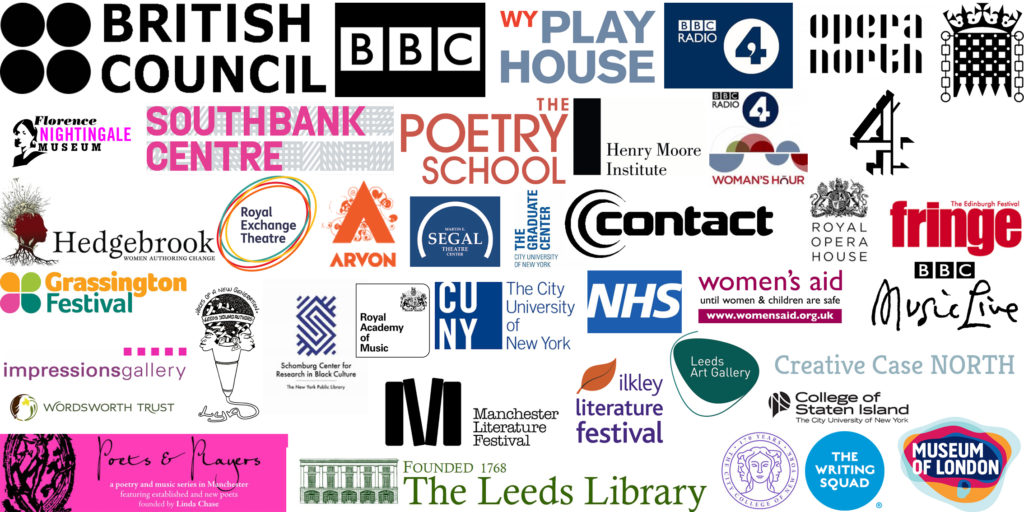